I love this art work by Arnold & Son, on the HMS1, and the Metiers d’Art TB Dragon Limited Edition reference 1ARAP.B04A. 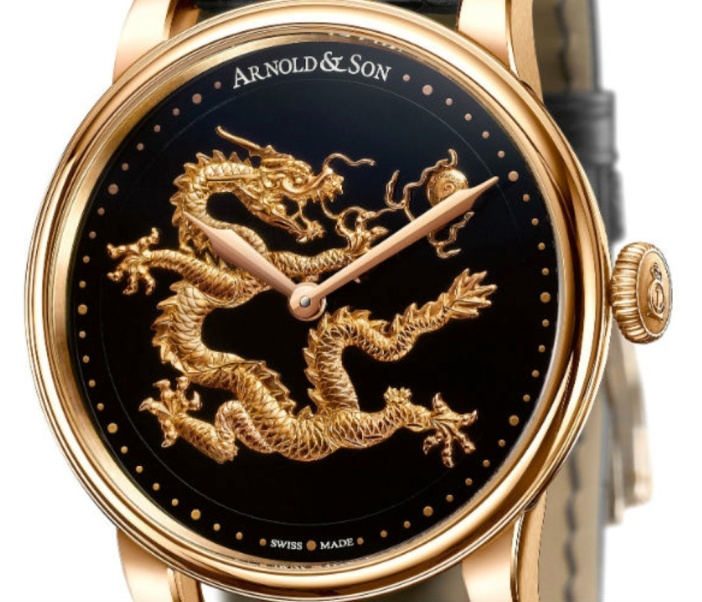 Dragons of course are representative of all kinds of things in various mythologies around the world. When it comes to such matters I always turn to the master, Joseph Campbell.

Here is Campbell on the meaning of dragons, as told to Bill Moyers <link>.

JOSEPH CAMPBELL: Dragons represent greed, really. The European dragon guards things in his cave, and what he guards are heaps of gold and virgins. And he can’t make use of either of them, but he just guards. There’s no vitality of experience, either of the value of the gold or of the female whom he’s guarding there. Psychologically, the dragon is one’s own binding of oneself to one’s ego, and you’re captured in your own dragon cage. And the problem of the psychiatrist is to break that dragon, open him up, so that you can have a larger field of relationships.

Jung had a patient come to him who felt alone, and she drew a picture of herself as caught in the rocks, from the waist down she was bound in rocks. And this was on a windy shore, and the wind blowing and her hair blowing, and all the gold, which is the sign of the vitality of life, was locked in the rocks. And the next picture that he had her draw had followed something he had said to her. Suddenly a lightning flash hit the rocks, and the gold came pouring out, and then she found reflected on rocks round about the gold. There was no more gold in the rocks, it was all available on the top. And in the conferences that followed, those patches of gold were identified. They were her friends. She wasn’t alone, but she had locked herself in her own little room and life, but she had friends. Do you see what I mean? This is killing the dragon. And you have fears and things, this is the dragon; that’s exactly what’s that all about. At least the European dragon; the Chinese dragon is different.

BILL MOYERS: What is it?

JOSEPH CAMPBELL: It represents the vitality of the swamps and the dragon comes out beating his belly and saying “Ha, ha, ha, ha, ha.” You know, that’s another kind of dragon. And he’s the one that yields the bounty and the waters and all that kind of thing. He’s the great glorious thing. But this is the negative one that cuts you down.

BILL MOYERS: So what you’re saying is, if there are not dragons out there, and there may not be at any one moment.

JOSEPH CAMPBELL: The real dragon is in you.

BILL MOYERS: And what is that real dragon?

JOSEPH CAMPBELL: That’s your ego, holding you in.

JOSEPH CAMPBELL: What I want, what I believe, what I can do, what I think I love, and all that. What I regard as the aim of my life and so forth. It might be too small. It might be that which pins you down. And if it’s simply that of doing what the environment tells you to do, it certainly is pinning you down. And so the environment is your dragon, as it reflects within yourself.

BILL MOYERS: How do I slay…

JOSEPH CAMPBELL: How do you?

BILL MOYERS: Slay that dragon in me? What’s the journey I have to make, you have to make, each of us has to make? You talk about something called the soul’s high adventure.

JOSEPH CAMPBELL: My general formula for my students is, follow your bliss, I mean, find where it is, and don’t be afraid to follow it.

BILL MOYERS: Can my bliss be my life’s love, or my life’s work?

JOSEPH CAMPBELL: Well, it will be your life.

BILL MOYERS: Is it my work or my life?

BILL MOYERS: Unlike the classical heroes, we’re not going on our journey to save the world, but to save ourselves.

JOSEPH CAMPBELL: And in doing that, you save the world. I mean, you do. The influence of a vital person vitalizes, there’s no doubt about it. The world is a wasteland. People have the notion of saving the world by shifting it around and changing the rules and so forth. No, any world is a living world if it’s alive, and the thing is to bring it to life. And the way to bring it to life is to find in your own case where your life is, and be alive yourself, it seems to me.

BILL MOYERS: But you say I have to take that journey and go down there and slay those dragons. Do I have to go alone?

JOSEPH CAMPBELL: If you have someone who can help you, that’s fine, too. But ultimately the last trick has to be done by you.